Dylan O’Flynn has a BSc (Hons) in Environmental Science and Technology from Dublin City University (DCU), where he has remained to complete a Masters by research as a contributor to the EPA funded project EMPIRE – Effect-Based Monitoring for Pharmaceutical Pollution in Ireland. Passionate about the environment and natural world, Dylan has already achieved a scholarship to study at the University of Wollongong, Australia and has presented posters at three environmental conferences in the last year. Read his Shimadzu user interview with Mason below.

1. When was your first experience working with Shimadzu?

My first experience with Shimadzu was actually when I started my Masters research, from starting off I thought it was quite an easy system to get used to even from my level of experience, which was quite rudimentary at the time. I think as a beginner, the Shimadzu software really eases you into it, it isn’t an intimidating set up.

2. What are you currently working on and how are you utilising Shimadzu? 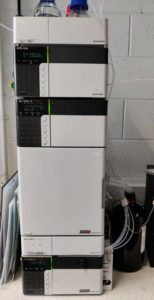 I’m currently working on a project called EMPIRE, it’s a pilot project that incorporates effect-based monitoring to assess pharmaceuticals in Irish surface water catchments. By incorporating bioassays validated by chemical methods, we hope to determine the concentration and potential effects pharmaceuticals have to sensitive organisms such as daphnia and algae. We’re looking at 16 different pharmaceuticals and my role will be to measure the levels found in the environment at various locations. This is what I will be using Shimadzu HPLC for. When we know the concentrations, we will then apply them to in-vivo and in-vitro bioassays so we can monitor cellular/subcellular responses. This project will hopefully show the effects and challenges that a complex cocktail of pharmaceuticals pose to surface water organisms. I went to a conference in Barcelona (ICRAPHE 2019) recently and the whole conference was centred around this topic, it’s becoming a topic of increasing concern. In fact, the Water Framework Directive is continually evolving to include more pharmaceuticals, they already monitor some antibiotics like macrolides and amoxicillin, but I believe they are trying to add some anti-depressant drugs such as venlafaxine to it now. I’m particularly interested in anti-depressants as mental health has become a topic of increasing importance in recent years. Venlafaxine has already been found in surface water at very low levels, and in lab-based studies have been shown to decrease the predator escape responses of Pimephales promelas, a species of fish.

In terms of the source of these pharmaceuticals, the literature suggests that the majority comes from excretion, wastewater treatment plants can remove some but not all of them. However, there are some examples of areas outside of the EU in close proximity to pharmaceutical manufacturers that have milligram per litre levels of antibiotics! In the EU and Ireland we are far more regulated, but we still don’t have a lot of information on this.

The project is ran solely in DCU now, but we do have external experts on our steering committee. Professor Alistair Boxall from the University of York is the Principal Investigator looking over it. We also have representatives from the EPA and Irish Water, they’re very interested in finding better ways to clean the water.

3. What is next for your research?

I’m hoping to publish my literature review. When I transfer to PhD I’m also hoping to work with wastewater treatment plants to monitor the concentration of the pharmaceuticals at that point and try to help them improve their removal. Later this year I would love to run some samples on an MS, for publishing I think this is important to do.

I also need to do some sampling, the EPA have offered us a good selection of their sites for this. I’m mainly doing rivers at the moment, I’ll do a few different ones then focus in on a catchment area and take samples at various points to see what the levels are and if they change.

As an end to the project I’m also researching on technologies to eliminate pharmaceuticals from water, some possibilities I’m reading about are ozonation, activated carbon and membrane filtration.

4. Do you have any new analytical techniques or technologies you hope to explore in the future?

A spare MS would be great, but I’d really love some sort of auto-extractor. Doing Solid Phase Extraction on such big volumes of water is painstaking!

5. What are your future career plans?

Ideally, I would like to go into industry or work for a governmental organization like the EPA, who funded the EMPIRE project. I’m interested in the environment and conservation since I was a very young, I was a big Steve Irwin fan! My father thought me how to fly fish when I was growing up and now I also do a bit of scuba diving so I can’t get enough of the outdoors. Being out in these environments all the time and looking at the amazing scenery and clean rivers, you really want to keep it that way!

PREVIOUS
BACK TO ALL
NEXT